Before starting homewards we would sit there for a long time, eating fruit and bread and chocolate, on the grass over which came to us, faint, horizontal, but dense and metallic still, echoes of the bells of Saint-Hilaire, which had not melted into the air they had traversed for so long, and, ribbed by the successive palpitation of all their sound-waves, throbbed as they grazed the flowers at our feet. 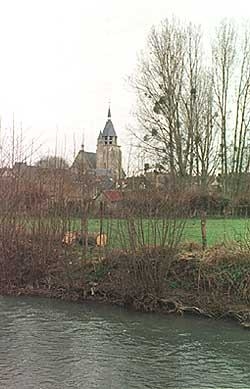 After lunch the sun, conscious that it was Saturday, would blaze an hour longer in the zenith, and when someone, thinking that we were late in starting for our walk, said, "What, only two o'clock!" on registering the passage of the twin strokes from the steeple of Saint-Hilaire (which as a rule met no one at that hour upon the highways, deserted for the midday meal or for the nap which follows it, or on the banks of the bright and ever-flowing stream, which even the angler had abandoned, and passed unaccompanied across the vacant sky, where only a few loitering clouds remained to greet them) the whole family would respond in chorus: "Why, you're forgetting we had lunch an hour earlier; you know very well it's Saturday." 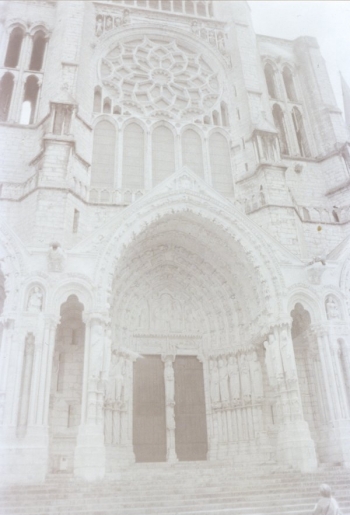 All this, and still more the treasures which had come to the church from personages who to me were almost legendary figures (such as the golden cross wrought, it was said, by Saint Eloi and presented by Dagobert, and the tomb of the sons of Louis the Germanic in porphyry and enamelled copper), because of which I used to advance into the church, as we made our way to our seats, as into a fairy-haunted valley, where the rustic sees with amazement in a rock, a tree, a pond, the tangible traces of the little peoples' supernatural passage—all this made of the church for me something entirely different from the rest of the town: an edifice occupying, so to speak, a four-dimensional space—the name of the fourth being Time—extending through the centuries its ancient nave, which, bay after bay, chapel after chapel, seemed to stretch across and conquer not merely a few yards of soil, but each successive epoch from which it emerged triumphant, hiding the rugged barbarities of the eleventh century in the thickness of its walls, through which nothing could be seen of the heavy arches, long stopped and blinded with coarse blocks of ashlar, except where, near the porch, a deep cleft had been hollowed out by the tower staircase, and veiling it even there by the graceful Gothic arcades which crowded coquettishly around it like a row of grown-up sisters who, to hide him from the eyes of strangers, arrange themselves smilingly in front of a rustic, peevish and ill-dressed younger brother; raising up into the sky above the Square a tower which had looked down upon Saint Louis, and seemed to see him still; and thrusting down with its crypt into a Merovingian darkness, through which, guiding us with groping finger-tips beneath the shadowy vault, powerfully ribbed like an immense bat’s wing of stone, Théodore and his sister would light up for us with a candle the tomb of Sigebert’s little daughter, in which a deep cavity, like the bed of a fossil, had been dug, or so it was said, “by a crystal lamp which, on the night when the Frankish princess was murdered, had detached itself, of its own accord, from the golden chains by which it was suspended on the site of the present apse and, with neither the crystal being broken nor the light extinguished, had buried itself in the stone, which had softly given way beneath it.” 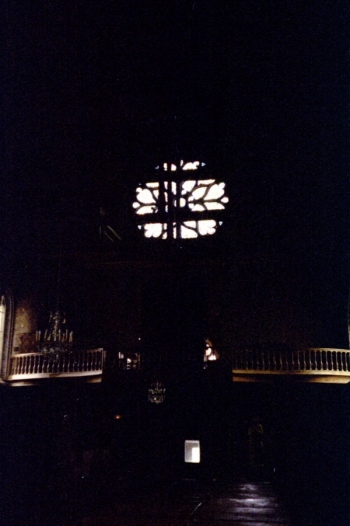 Its windows were never so sparkling as on days when the sun scarcely shone, so that if it was dull outside you could be sure it would be fine inside the church. One of them was filled from top to bottom by a solitary figure, like the king on a playing-card, who lived up there beneath his canopy of stone, between earth and heaven, and in whose slanting blue gleam, on weekdays sometimes, at noon, when there was no service (at one of those rare moments when the airy, empty church, more human somehow and more luxurious, with the sun showing off all its rich furnishings, had an almost habitable air, like the entrance hall—all sculptured stone and painted glass—of some hotel in the mediaeval style), you might see Mme Sazerat kneel for an instant, laying down on the seat next to hers a neatly corded parcel of little cakes which she had just bought at the baker’s and was taking home for lunch. In another, a mountain of pink snow, at whose foot a battle was being fought, seemed to have frozen against the very glass itself, which it swelled and distorted with its cloudy sleet, like a window to which snowflakes have drifted and clung, illumined by the light of dawn—the same, doubtless, that tinged the reredos of the altar with hues so fresh that they seemed rather to be thrown on it momentarily by a light shining from outside and shortly to be extinguished than painted and permanently fastened on the stone. And all of them were so old that you could see, here and there, their silvery antiquity sparkling with the dust of centuries and showing in its threadbare brilliance the texture of their lovely tapestry of glass. There was one among them which was a tall panel composed of a hundred little rectangular panes, of blue principally, like an enormous pack of cards of the kind planned to beguile King Charles VI; but, either because a ray of sunlight had gleamed through it or because my own shifting glance had sent shooting across the window, whose colours died away and were rekindled by turns, a rare and flickering fire—the next instant it had taken on the shimmering brilliance of a peacock’s tail, then quivered and rippled in a flaming and fantastic shower that streamed from the groin of the dark and stony vault down the moist walls, as though it were along the bed of some grotto glowing with sinuous stalactites that I was following my parents, who preceded me with their prayer-books clasped in their hands. A moment later the little lozenge panes had taken on the deep transparency, the unbreakable hardness of sapphires clustered on some enormous breastplate behind which, however, could be distinguished, dearer than all such treasures, a fleeting smile from the sun, which could be seen and felt as well here, in the soft, blue stream with which it bathed the jewelled windows, as on the pavement of the Square or the straw of the market-place; and even on our first Sundays, when we had come down before Easter, it would console me for the blackness and bareness of the earth outside by quickening into blossom, as in some springtime in old history among the heirs of Saint Louis, this dazzling, gilded carpet of forget-me-nots in glass. 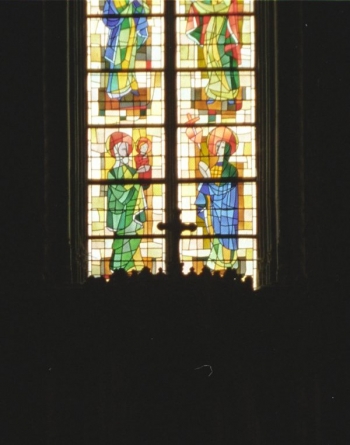 Its memorial stones, beneath which the noble dust of the Abbots of Combray who lay buried there furnished the choir with a sort of spiritual pavement, were themselves no longer hard and lifeless matter, for time had softened them and made them flow like honey beyond their proper margins, here oozing out in a golden stream, washing from its place a florid Gothic capital, drowning the white violets of the marble floor, and elsewhere reabsorbed into their limits, contracting still further a crabbed Latin inscription, bringing a fresh touch of fantasy into the arrangement of its curtailed characters, closing together two letters of some word of which the rest were disproportionately distended. 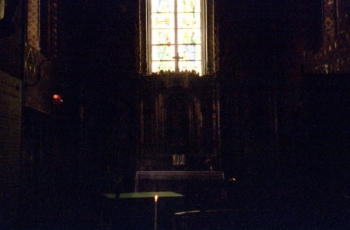 How I loved our church, and how clearly I can see it still! The old porch by which we entered, black, and full of holes as a colander, was worn out of shape and deeply furrowed at the sides (as also was the font to which it led us) just as if the gentle friction of the cloaks of peasant-women coming into church, and of their fingers dipping into the holy water, had managed by age-long repetition to acquire a destructive force, to impress itself on the stone, to carve grooves in it like those made by cart-wheels upon stone gate-posts which they bump against every day. 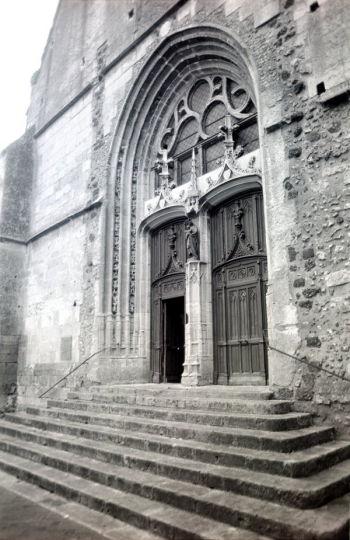