But in my dreams of Combray

But in my dreams of Combray (like those architects, pupils of Viollet-le-Duc, who, fancying that they can detect, beneath a Renaissance rood-screen and an eighteenth-century altar, traces of a Romanesque choir, restore the whole church to the state in which it must have been in the twelfth century) I leave not a stone of the modern edifice standing, but pierce through it and "restore" the Rue des Perchamps. And for such reconstruction memory furnishes me with more detailed guidance than is generally at the disposal of restorers: the pictures which it has preserved—perhaps the last surviving in the world today, and soon to follow the rest into oblivion—of what Combray looked like in my childhood days; pictures which, because it was the old Combray that traced their outlines upon my mind before it vanished, are as moving—if I may compare a humble landscape with those glorious works, reproductions of which my grandmother was so fond of bestowing on me—as those old engravings of the Last Supper or that painting by Gentile Bellini, in which one sees, in a state in which they no longer exist, the masterpiece of Leonardo and the portico of Saint Mark’s. 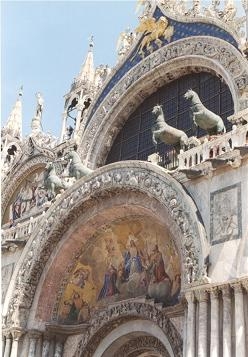