Often, too, we would hurry to take shelter

Often, too, we would hurry to take shelter, huddled together cheek by jowl with its stony saints and patriarchs, under the porch of Saint-André-des-Champs. How French that church was! Over its door the saints, the chevalier kings with lilies in their hands, the wedding scenes and funerals were carved as they might have been in the mind of Françoise. The sculptor had also recorded certain anecdotes of Aristotle and Virgil, precisely as Françoise in her kitchen was wont to hold forth about St Louis as though she herself had known him, generally in order to depreciate, by contrast with him, my grandparents whom she considered less “righteous.” One could see the notions which the mediaeval artist and the mediaeval peasant (who had survived to cook for us in the nineteenth century) had of classical and of early Christian history, notions whose inaccuracy was atoned for by their honest simplicity, were derived not from books, but from a tradition at once ancient and direct, unbroken, oral, distorted, unrecognisable, and alive. Another Combray personality whom I could discern also, potential and presaged, in the Gothic sculptures of Saint-André-des-Champs was young Théodore, the assistant in Camus’s shop. And, indeed, Françoise herself was so well aware that she had in him a countryman and contemporary that when my aunt was too ill for Françoise to be able, unaided, to lift her in her bed or to carry her to her chair, rather than let the kitchen-maid come upstairs and, perhaps, get into my aunt’s good books, she would send for Théodore. And this lad, who was rightly regarded as a scapegrace, was so abounding in that spirit which had served to decorate the porch of Saint-André-des-Champs, and particularly in the feelings of respect due, in Françoise’s eyes, to all “poor invalids,” and above all to her own “poor mistress,” that when he bent down to raise my aunt’s head from her pillow, he wore the same naïve and zealous mien as the little angels in the bas-reliefs who throng, with tapers in their hands, about the swooning Virgin, as though those carved stone faces, naked and grey as trees in winter, were, like them, asleep only, storing up life and waiting to flower again in the countless plebeian faces, reverent and cunning as the face of Théodore, and glowing with the ruddy brilliance of ripe apples. 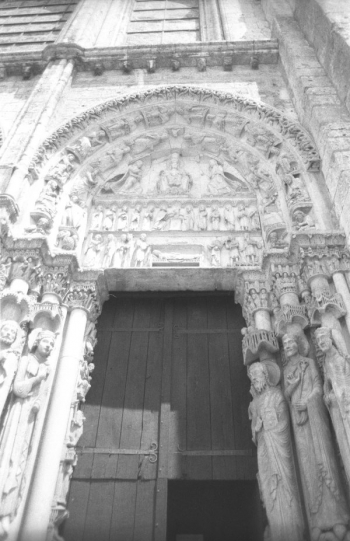