Alas! We had definitely to alter our opinion of M. Legrandin

Alas! We had definitely to alter our opinion of M. Legrandin. On one of the Sundays following our meeting with him on the Pont-Vieux, after which my father had been forced to confess himself mistaken, as mass drew to an end and, with the sunshine and the noise of the outer world, something else invaded the church, an atmosphere so far from sacred that Mme Goupil, Mme Percepied (everyone, in fact, who not so long before, when I arrived a little late, had been sitting motionless, engrossed in their prayers, and who I might even have thought oblivious of my entry had not their feet moved slightly to push away the little kneeling-bench which was preventing me from getting to my chair) had begun to discuss with us out loud all manner of utterly mundane topics as though we were already outside in the Square, we saw Legrandin on the sunbaked threshold of the porch dominating the many-coloured tumult of the market, being introduced by the husband of the lady we had seen him with on the previous occasion to the wife of another large landed proprietor of the district. Legrandin’s face wore an expression of extraordinary zeal and animation; he made a deep bow, with a subsidiary backward movement which brought his shoulders sharply up into a position behind their starting-point, a gesture in which he must have been trained by the husband of his sister, Mme de Cambremer. This rapid straightening-up caused a sort of tense muscular wave to ripple over Legrandin’s rump, which I had not supposed to be so fleshy; I cannot say why, but this undulation of pure matter, this wholly carnal fluency devoid of spiritual significance, this wave lashed into a tempest by an obsequious alacrity of the basest sort, awoke my mind suddenly to the possibility of a Legrandin altogether different from the one we knew. The lady gave him some message for her coachman, and as he walked over to her carriage the impression of shy and respectful happiness which the introduction had stamped upon his face still lingered there. Rapt in a sort of dream, he smiled, then began to hurry back towards the lady; as he was walking faster than usual, his shoulders swayed backwards and forwards, right and left, in the most absurd fashion; and altogether he looked, so utterly had he abandoned himself to it, to the exclusion of all other considerations, as though he were the passive, wire-pulled puppet of his own happiness. Meanwhile we were coming out through the porch and were about to pass close beside him; he was too well bred to turn his head away, but he fixed his eyes, which had suddenly changed to those of a seer lost in the profundity of his vision, on so distant a point of the horizon that he could not see us and so had no need to acknowledge our presence. His face was as artless as ever above his plain, single-breasted jacket, which looked as though conscious of having been led astray and plunged willy-nilly into surroundings of detested splendour. And a spotted bow-tie, stirred by the breezes of the Square, continued to float in front of Legrandin like the standard of his proud isolation and his noble independence. When we reached the house my mother discovered that the baker had forgotten to deliver the cream tart and asked my father to go back with me and tell them to send it up at once. Near the church we met Legrandin coming towards us with the same lady, whom he was escorting to her carriage. He brushed past us, and did not interrupt what he was saying to her, but gave us, out of the corner of his blue eye, a little sign which began and ended, so to speak, inside his eyelids and which, as it did not involve the least movement of his facial muscles, managed to pass quite unperceived by the lady; but, striving to compensate by the intensity of his feelings for the somewhat restricted field in which they had to find expression, he made that blue chink which was set apart for us sparkle with all the zest of an affability that went far beyond mere playfulness, almost touched the border-line of roguery; he subtilised the refinements of good-fellowship into a wink of connivance, a hint, a hidden meaning, a secret understanding, all the mysteries of complicity, and finally elevated his assurances of friendship to the level of protestations and affection, even of a declaration of love, lighting up for us alone, with a secret and languid flame invisible to the chatelaine, an enamoured pupil in a countenance of ice. 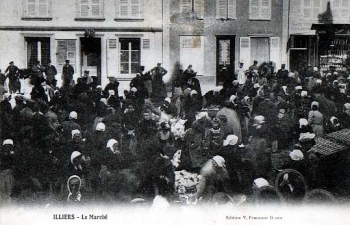