On leaving the church we would stay chatting for a moment with M. Vinteuil

On leaving the church we would stay chatting for a moment with M. Vinteuil in front of the porch. Boys would be chasing one another in the Square, and he would intervene, taking the side of the little ones and lecturing the big. If his daughter said in her gruff voice how glad she had been to see us, immediately it would seem as though a more sensitive sister within her had blushed at this thoughtless, schoolboyish utterance which might have made us think that she was angling for an invitation to the house. Her father would then arrange a cloak over her shoulders, they would clamber into a little dog-cart which she herself drove, and home they would both go to Montjouvain. As for ourselves, the next day being Sunday, with no need to be up and stirring before high mass, if it was a moonlight night and warm, my father, in his thirst for glory, instead of taking us home at once would lead us on a long walk round by the Calvary, which my mother’s utter incapacity for taking her bearings, or even for knowing which road she might be on, made her regard as a triumph of his strategic genius. 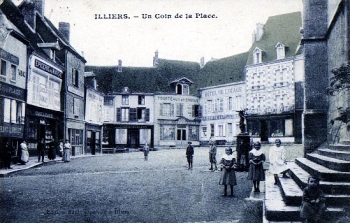