As we were liable, there, to meet M. Vinteuil

As we were liable, there, to meet M. Vinteuil, who held very strict views on "the deplorable slovenliness of young people, which seems to be encouraged these days," my mother would first see that there was nothing out of order in my appearance, and then we would set out for the church. It was in the "Month of Mary" that I remember having first fallen in love with hawthorns. Not only were they in the church, where, holy ground as it was, we had all of us a right of entry, but arranged upon the altar itself, inseparable from the mysteries in whose celebration they participated, thrusting in among the tapers and the sacred vessels their serried branches, tied to one another horizontally in a stiff, festal scheme of decoration still further embellished by the festoons of leaves, over which were scattered in profusion, as over a bridal train, little clusters of buds of a dazzling whiteness. Though I dared not look at it except through my fingers, I could sense that this formal scheme was made of living things, and that it was Nature herself who, by trimming the shape of the foliage, and by adding the crowning ornament of those snowy buds, had made the decorations worthy of what was at once a public rejoicing and a solemn mystery. Higher up on the altar, a flower had opened up here and there with a careless grace, holding so unconcernedly, like a final, almost vaporous adornment, its bunch of stamens, slender as a gossamer and entirely veiling each corolla, that in following, in trying to mimic to myself the action of their efflorescence, I imagined it as a swift and thoughtless movement of the head, with a provocative glance from her contracted pupils, by a young girl in white, insouciant and vivacious. 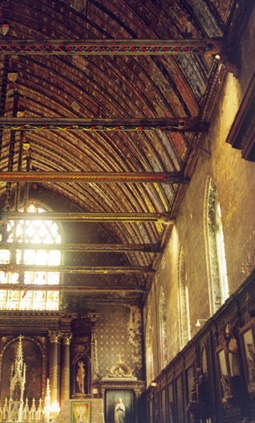