But, as I said to this artist

But, as I said to this artist, who, by the way, seems to be a most civil fellow, and is a regular virtuoso, it appears, with the brush, what on earth do you find so extraordinary in this window, which is if anything a little dingier than the rest?”
“I am sure that if you were to ask the Bishop,” said my aunt in a resigned tone, for she had begun to feel that she was going to be “tired,” “he would never refuse you a new window.”
“You may depend upon it, Mme Octave,” replied the Curé. “Why, it was his Lordship himself who started the outcry about the window, by proving that it represented Gilbert the Bad, a lord of Guermantes and a direct descendant of Genviève de Brabant who was a daughter of the House of Guermantes, receiving absolution from Saint Hilaire.”
“But I don’t see where Saint Hilaire comes in.”
“Why yes, have you never noticed, in the corner of the window, a lady in a yellow robe? Well, that’s Saint Hilaire, who is also known, you will remember, in certain parts of the country as Saint Illiers, Saint Hélier, and even, in the Jura, Saint Ylie. But these various corruptions of Sanctus Hilarius are by no means the most curious that have occurred in the names of the blessed. Take, for example, my good Eulalie, the case of your own patron, Sancta Eulalia; do you know what she has become in Burgundy? Saint Eloi, nothing more nor less! The lady has become a gentleman. Do you hear that, Eulalie—after you’re dead they’ll make a man out of you!” 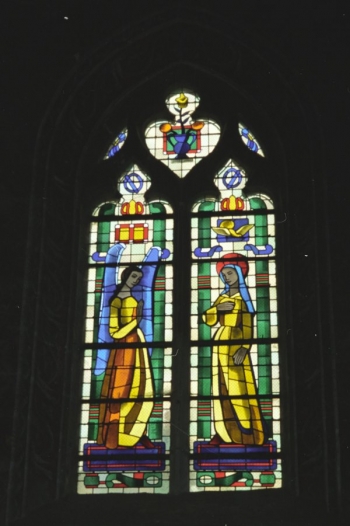