What is this I have been hearing, Father

“What is this I have been hearing, Father, about a painter setting up his easel in your church, and copying one of the windows? Old as I am, I can safely say that I have never heard of such a thing in all my life! What is the world coming to! And the ugliest thing in the whole church, too.”
“I will not go so far as to say that it’s quite the ugliest , for although there are certain things in Saint-Hilaire which are well worth a visit, there are others that are very old now in my poor basilica, the only one in all the diocese that has never even been restored. God knows our porch is dirty and antiquated, but still it has a certain majesty. I’ll even grant you the Esther tapestries, which personally I wouldn’t give a brass farthing for, but which the experts place immediately after the ones at Sens. I can quite see, too, that apart from certain details which are—well, a trifle realistic—they show features which testify to a genuine power of observation. But don’t talk to me about the windows. Is it common sense, I ask you, to leave up windows which shut out all the daylight and even confuse the eyes by throwing patches of colour, to which I should be hard put to it to give a name, on to floor in which there are not two slabs on the same level and which they refuse to renew for me because, if you please, those are the tombstones of the Abbots of Combray and the Lords of Guermantes, the old Counts, you know, of Brabant, direct ancestors of the present Duc de Guermantes and of the Duchess too since she was a Mademoiselle de Guermantes who married her cousin?” 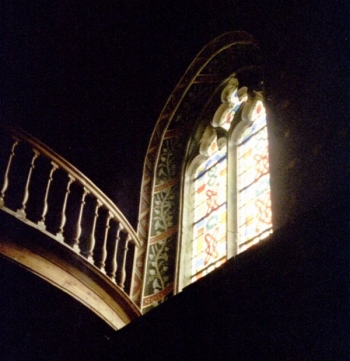