And I would go and sit down beside the pump and its trough, ornamented here and there, like a Gothic font, with a salamander, which impressed on the rough stone the mobile relief of its tapering allegorical body, on the bench without a back, in the shade of a lilac-tree, in that little corner of the garden which opened, through a service door, on to the Rue du Saint-Esprit, and from whose neglected soil there rose, in two stages, jutting out from the house itself, and as it were a separate building, my aunt’s back-kitchen. One could see its red-tiled floor gleaming like porphyry. It seemed not so much the cave of Françoise as a little temple of Venus. It would be overflowing with the offerings of the dairyman, the fruiterer, the greengrocer, come sometimes from distant villages to dedicate to the goddess the first-fruits of their fields. And its roof was always crowned with a cooing dove. 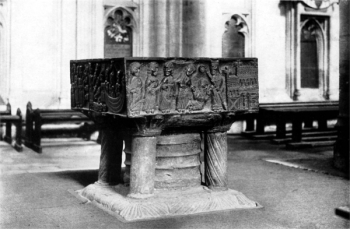