Often in the Square

Often in the Square, as we came home, my grandmother would make me stop to look up at it. From the tower windows, placed two by two, one pair above another, with that right and original proportion in their spacing which gives beauty and dignity not only to human faces, it released, it let fall at regular intervals, flocks of jackdaws which would wheel noisily for a while, as though the ancient stones which allowed them to disport themselves without seeming to see them, becoming of a sudden untenantable and discharging some element of extreme perturbation, had struck them and driven them out. Then, having crisscrossed in all directions the violet velvet of the evening air, they would return, suddenly calmed, to absorb themselves in the tower, baleful no longer but benignant, some perching here and there (not seeming to move, but perhaps snapping up some passing insect) on the points of turrets, as a seagull perches with an angler’s immobility on the crest of a wave. Without quite knowing why, my grandmother found in the steeple of Saint-Hilaire that absence of vulgarity, pretension, and niggardliness which made her love, and deem rich in beneficent influences, nature itselfwhen the hand of man had not, as did my great-aunt’s gardener, trimmed itand the works of genius. And certainly every part of the church that one saw distinguished it from any other building by a kind of innate thoughtfulness, but it was in its steeple that it seemed most truly to find itself, to affirm its individual and responsible existence. It was the steeple that spoke for the church. I think, too, that in a confused way my grandmother found in the steeple of Combray what she prized above anything else in the world, namely, a natural air and an air of distinction. Ignorant of architecture, she would say:
"My dears, laugh at me if you like; it is not conventionally beautiful, but there is something in its quaint old face that pleases me. If it could play the piano, I’m sure it wouldn’t sound tinny." And when she gazed up at it, when her eyes followed the gentle tension, the fervent inclination of its tiny slopes which drew together as they rose, like hands joined in prayer, she would absorb herself so utterly in the effusion of the spire that her gaze seemed to leap upwards with it; her lips at the same time curving in a friendly smile for the worn old stones of which the setting sun now illumined no more than the topmost pinnacles and which, at the point where they entered that sunlit zone and were softened by it, seemed to have mounted suddenly far higher, to have become truly remote, like a song taken up again in a "head voice," an octave above. 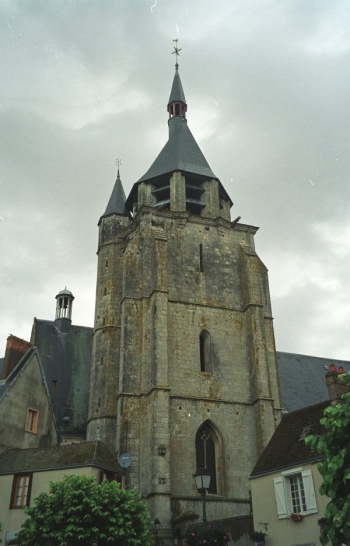