The steeple of Saint-Hilaire

The steeple of Saint-Hilaire could be distinguished from a long way off, inscribing its unforgettable form upon a horizon against which Combray had not yet appeared; when from the train which brought us down from Paris at Easter-time my father caught sight of it, as it slipped into every fold of the sky in turn, its little iron weathercock veering in all directions, he would say: "Come on, get your wraps together, we’re there." And on one of the longest walks we used to take from Combray there was a spot where the narrow road emerged suddenly on to an immense plain, closed at the horizon by a jagged ridge of forest above which rose the solitary point of Saint-Hilaire’s steeple, so slender and so pink that it seemed to be no more than scratched by the finger-nail of a painter anxious to give to such a landscape, to so pure a piece of nature, this little sign of art, this single indication of human existence. As one drew near it and could see the remains of the square tower, half in ruins, which still stood by its side, though without rivalling it in height, one was struck most of all by the dark-red tones of its stones; and on a misty morning in autumn one might have thought it, rising above the violet thunder-cloud of the vineyards, a ruin of purple, almost the colour of Virginia creeper. 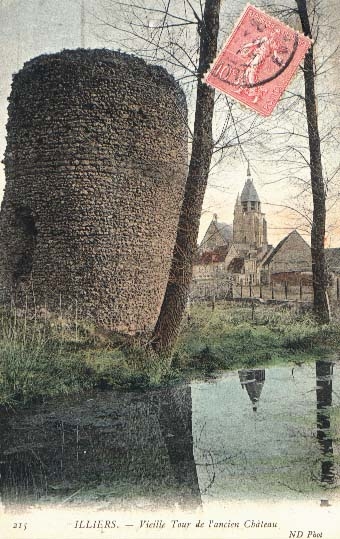