The church! Homely and familiar

The church! Homely and familiar, cheek by jowl in the Rue Saint-Hilaire, upon which its north door opened, with its two neighbours, Mme Loiseau’s house and M. Rapin’s pharmacy, against which its walls rested without interspace, a simple citizen of Combray, which might have had its number in the street had the streets of Combray borne numbers, and at whose door one felt that the postman ought to stop on his morning rounds, before going into Mme Loiseau’s and after leaving M. Rapin’s, there existed, none the less, between the church and everything in Combray that was not the church a clear line of demarcation which my mind has never succeeded in crossing. In vain might Mme Loiseau deck her windowsills with fuchsias, which developed the bad habit of letting their branches trail at all times and in all directions, head downwards, and whose flowers had no more important business, when they were big enough to taste the joys of life, than to go and cool their purple, congested cheeks against the dark front of the church, to me such conduct sanctified the fuchsias not at all; between the flowers and the blackened stone against which they leaned, if my eyes could discern no gap, my mind preserved the impression of an abyss. 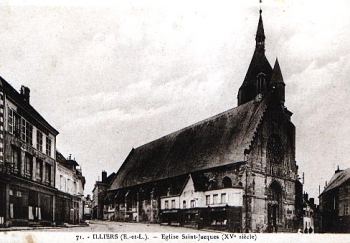