There were two tapestries of high warp

There were two tapestries of high warp representing the coronation of Esther (tradition had it that the weaver had given to Ahasuerus the features of one of the kings of France and to Esther those of a lady of Guermantes whose lover he had been), to which the colours, in melting into one another, had added expression, relief and light: a touch of pink over the lips of Esther had strayed beyond their outline; the yellow of her dress was spread so unctuously, so thickly, as to have acquired a kind of solidity, and stood out boldly against the receding background; while the green of the trees, still bright in the lower parts of the panel of silk and wool, but quite “gone” at the top, brought out in a paler tone, above the dark trunks, the yellowing upper branches, gilded and half-obliterated by the sharp though sidelong rays of an invisible sun. 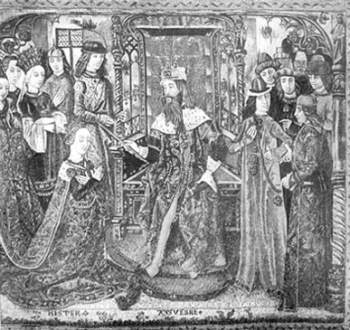