Now the chapel from which she was following the service

Now the chapel from which she was following the service was that of Gilbert the Bad, beneath the flat tombstones of which, yellowed and bulging like cells of honey in a comb, rested the bones of the old Counts of Brabant; and I remembered having heard it said that this chapel was reserved for the Guermantes family, whenever any of its members came to attend a ceremony at Combray; hence there was only one woman resembling the portrait of Mme de Guermantes who on that day, the very day on which she was expected to come there, could conceivably be sitting in that chapel: it was she! My disappointment was immense. It arose from my not having borne in mind, when I thought of Mme de Guermantes, that I was picturing her to myself in the colours of a tapestry or a stained-glass window, as living in another century, as being of another substance than the rest of the human race. 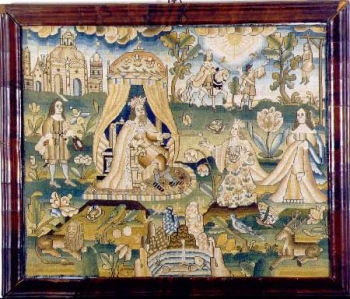